We proudly announce that Disguise, Yang Zhenzhong’s artwork for Ermanno Casoli Award XV edition has been selected for the XI Shanghai Biennale, from November 12th, 2016 to March 12th, 2017. 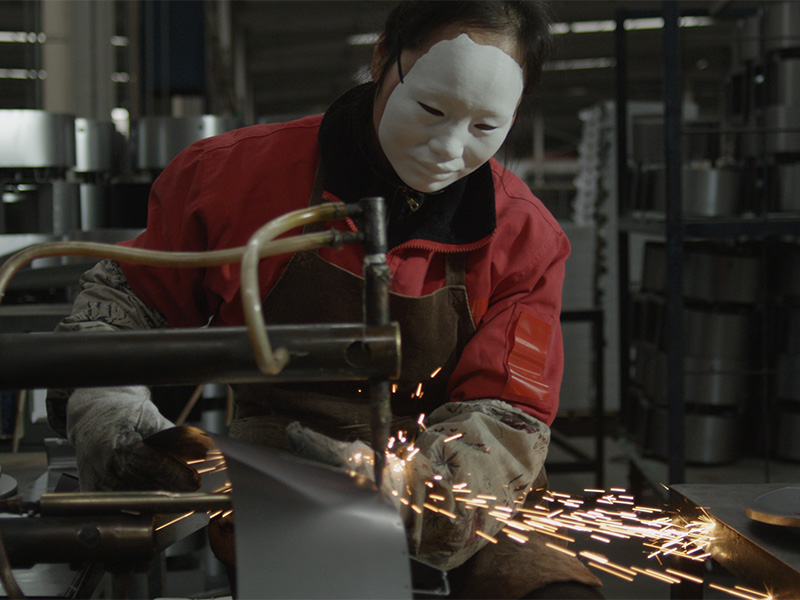 We proudly announce that Disguise, the work that artist Yang Zhenzhong created for the Ermanno Casoli Award XV edition, has been selected for the XI Shanghai Biennale, which will be held from November 12th, 2016 to March 12th, 2017 at the Power Station of Art in Shanghai, and is curated by Raqs Media Collective.

The Award is a commission that Fondazione Ermanno Casoli (FEC) gives to an artist to creating an artwork for a company, with the active participation of employees.
Yang Zhenzhong, as Ermanno Casoli Award winner, has been invited for a two month residency at Elica – a global leader in the production of hoods for household use –Shengzhou (China) plant. There, he held a workshop cycle that involved more than fifty employees, who created the installation that was presented during the Elica Show Room in Shanghai in May 2015.
The project title is Disguise and introduces its audience in a theatrical atmosphere, which is highlighted by a series of masks reproducing the involved employees, and was created by 3D scanning. Each mask was later worn by the very employees in a performance that took place within the company; the relevant documentation was later used to create a video installation.

“I asked employees to wear the mask they had created during the workshop first step through their faces scanning, during their working shift” – the artist tells. “The video shows the employees working and, simultaneously, staging the productive process. They express a kind of performative dynamic action despite they have to respect their roles’ rules within the company. With their faces covered by masks, their movements are always connected to the assembly line but, thanks to this metamorphosis, they acquire the grace of a freedom dance. Differently from what could be thought, the atmosphere during the workshop did not change the daily production potentiality; though, it turned it into a sort of theatre and added spirituality. Personally, this whole practice and creative procedure was a new extraordinary experience”.
We are cheerful that an international event such as the Shanghai Biennale, curated for this edition by a social-issue-sensitive artist collective, has chosen to present the work created by a group of employees within the E-Straordinario program, which is the educational path that FEC created to bring contemporary art into the business sector.