Artist Andrea Mastrovito (Bergamo, 1978) won the Ermanno Casoli Award, curated by Marcello Smarrelli, which has already reached its XVI edition and has always been the emblem of art-business contamination. 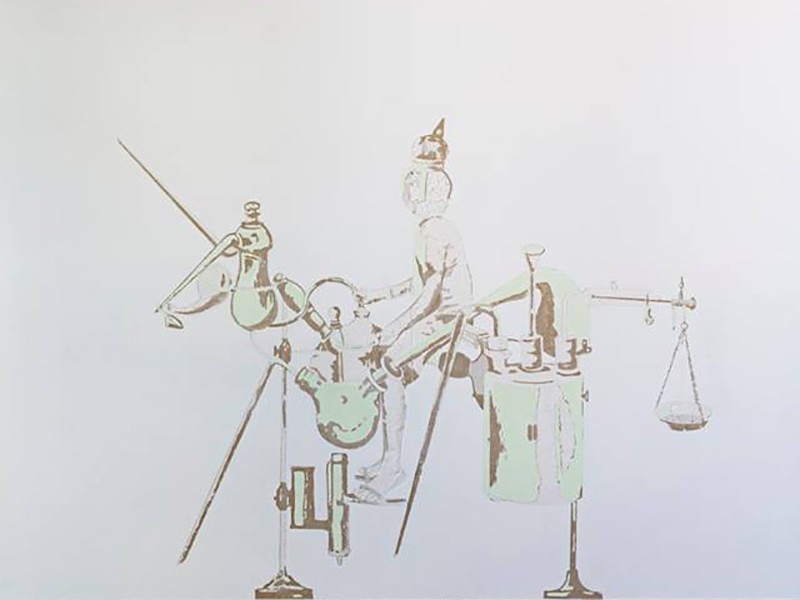 Artist Andrea Mastrovito (Bergamo, 1978) won the Ermanno Casoli Award, curated by Marcello Smarrelli, which has reached its XVI edition. This award has always symbolized the contamination between art and enterprise. The artist has been awarded with several prizes and is an important voice in both domestic and international contermporary art scene, due to his ground-breaking research, in line with FEC’s values.

The Ermanno Casoli Award XVI edition introduces a new aspect: the activities will be thoroughly carried out in the Ancona Angelini pharmaceutical plant and are included within an educational project arisen from the collaboration between the Foundation and M&D Company, which have worked together for years in different initiatives.

For this occasion, Andrea Mastrovito has conceived a path through art and education that he entitled Vitriol: this term – which is a Latin acronym whose meaning is well known to alchemists: Visita Interiora Terrae Rectificando Invenies Occultum Lapidem namely “Visit the interior of the earth and purifying you will find the hidden stone” – has inspired the artist for the creation of a seven wall-work cycles within the company spaces.

More than 100 Angelini employees were involved in this educational path in which the employees were divided into groups and have contributed to Vitriol making, supported by the artist. This permanent artwork was specifically conceived for their work space. Artist, employees, trainer and curator developed their team work by discussing every step of the project – from its conception to its implementation. They worked side by side during the whole making process.

Mastrovito and more than 100 employees have made 7 wall paintings, by engraving the walls of 7 selected spots inside the plant; they have created a series of figures that were shaped through the pre-existing colors within the wall layers. A real space archeology was unveiled within the layers and in the passage of time.

For the work concept, the artist was inspired by medicine and pharmaceutics; particularly, he focused on the chemical process that turns an active principle into a powder to be used in the pharmaceutical industry. The project hint arises from the artist observing the chemical processes observation – complex and rich in steps – through which active principles powders are obtained. Finally, for this reason, the powders from the engravings were collected and exhibited together with the artwork, as if they were the “soul” of the wall-engraved figure, its “active principle” –, reconnecting to Angelini’s activity.

Vitriol will be presented to the audience, the press and the institution representatives on September 16th, at 5:00pm at Angelini A.C.R.A.F. Ancona, as a further testimony of the advantages brought by the art-enterprise interaction.

Entrance upon invitation or subscription at: segreteria@fondazionecasoli.org